News of the Week + Commentary 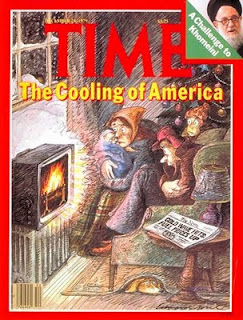 The Kennedy Family in the News -

Kennedy said the bishop had explained the penalty by telling him “that I am not a good practicing Catholic because of the positions that I’ve taken as a public official,” particularly on abortion. He declined to say when or how Bishop Tobin told him not to take the sacrament. And he declined to say whether he has obeyed the bishop’s injunction.

These are the rules of the game. If you belong to the Church and you are a strong advocate of abortion - don't expect the two to mix well. Don't blame the Church for not changing their rules for you.

Global WarmingGate - Yes Dorothy, there are Scientists with Political Agendas.

What happened to the good ole days of Global Cooling? That's the disaster scenario that I grew up with.

JERUSALEM, Nov. 22 (Xinhua) -- Hamas announced on Saturday it reached an agreement with other Palestinian factions in the Gaza Strip to only fire rockets against Israeli targets in response to any future Israeli military incursion into the coastal enclave.

Just hours after the Hamas statement, Israel responded to a rocket attack fired from Gaza earlier on Saturday. Israeli aircraft targeted what the Israel Defense Forces (IDF) said were two weapons-making facilities in northern and central Gaza and one smuggling tunnel under the border between Gaza and Egypt.

What rockets officer? I didn't see no rockets! And for sure I didn't know about any weapon-making facilities!

Obama did not mention the looming decision in his remarks to U.S. troops, referring to the Afghan conflict only by thanking South Korea for its efforts and expressing gratitude to the American soldiers who have served there.

But he did discuss the region in his meeting with South Korean President Lee Myung-Bak, whose government has is sending 150 civilian aid workers to Afghanistan.

Obama arrived on the base 3:19 p.m. local time (1 a.m. Eastern Standard Time), and received a rousing welcome from 1,500 troops in camouflage uniforms, many holding cameras or pointing cell phones to snap pictures.

Standing on a riser wearing a blue suit and red tie, with a cluster of troops and a large American flag behind him, Obama expressed "the gratitude of the American public" and said his meetings in four countries over eight days in Asia will help deliver a "safer more prosperous world for all of us."

He got a huge cheer when he told them he was increasing military pay. "That's what you call an applause line," he said, before boarding his jet and taking off at 4:11 p.m.

The military is one big joke - he's looking for the photo-op and the applause line. That's what you call a good Commander-in-Chief.
Posted by Shira at 11:57 PM