Does the Jewish Vote Matter? 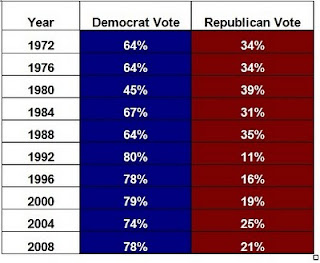 If you are a Jewish liberal/Democrat -- you don't count. That is, if you think that Israel is important.

Jews range between 1.7% and 2.2% of the United States' population, with the largest number focused in New York and California. Jews on a whole are liberal and vote Democratic. This tendency has been going on for a long time. The problem with this is that the Democratic Party has no reason to "prove" themselves to their Jewish constituents. Familiarity breeds contempt. We see this clearly with our current President and his administration.

We've seen how Vice-President Joe Biden had an issue with 1600 Jewish homes being built in Jerusalem - the 3000 year old capital of Israel.

We've seen how Secretary of State Hillary Clinton escalated tension between allies by having a 45 minute hissy fit on the phone with Prime Minister Benjamin Netanyahu.

We then saw President Barack Obama insult Prime Minister Netanyahu to his face by refusing a photo-op for the media and leaving Netanyahu to stew for an hour as Obama went to eat dinner with his family.

Even Abe Foxman, left-leaning head of the ADL was disturbed by this treatment.

"We are shocked and stunned at the Administration's tone and public dressing down of Israel," Anti-Defamation League director Abraham Foxman said in a statement. "We cannot remember an instance when such harsh language was directed at a friend and ally of the United States."

In fact we know that Obama does not concern himself with the Jewish voter. Obama spokesman, Robert Gibbs, related an instance where he was sitting in on a meeting related to the crisis with Israel.

He [Gibbs] did chime in during last month's escalating tensions with Israel, if only to make sure the president understood the "conventional wisdom" promoted in the media, that Obama's toughness with Likud hard-liners would potentially erode his domestic Jewish support. "For a lot of reasons, he would discount that," Gibbs said, referring to the president.

In other words, Obama is going to do whatever he wants without consideration for the voting block that placed 80% of it's support behind him. Amazing.

The bizarre concept of Obama attempting to force a "regime change" has been noted, evidenced by the attitude toward Netanyahu - publicly shaming him in front of the world.

There's a widespread view -- almost a conviction in Washington these days -- that Netanyahu just isn't capable of reaching a deal, and that the Palestinians and Arabs will never trust him. So why expend months of effort starting a process with Netanyahu that you can't possibly conclude with him?

The remedy, if regime change is the goal, is to hang tough on settlements, create conditions for starting negotiations that are reasonable but that Netanyahu's coalition can't accept, and not-so-subtly suggest that Netanyahu can't be a real partner in a peace process. The administration's recent leak that it's considering putting out its own peace plan will only further undermine any chance of partnership.

Sooner or later, the thinking goes, it would become clear in Israel that the prime minister can't manage the nation's most important relationship, and that he is putting settlements above Israeli security at a time when the Iranian threat looms large and close ties with the U.S. are more important than ever. The American hope would be that public and political pressure would mount, forcing Netanyahu to broaden his government or even impelling a change at the top.

Reported in today's New York Times is a focus on Obama's shift of focus in the Middle East, even declaring that solving the Israeli-Arab conflict was a

“vital national security interest of the United States,” he was highlighting a change that has resulted from a lengthy debate among his top officials over how best to balance support for Israel against other American interests.

This shift, described by administration officials who did not want to be quoted by name when discussing internal discussions, is driving the White House’s urgency to help broker a Middle East peace deal. It increases the likelihood that Mr. Obama, frustrated by the inability of the Israelis and the Palestinians to come to terms, will propose his own parameters for an eventual Palestinian state.

Mr. Obama said conflicts like the one in the Middle East ended up “costing us significantly in terms of both blood and treasure” — drawing an explicit link between the Israeli-Palestinian strife and the safety of American soldiers as they battle Islamic extremism and terrorism in Iraq, Afghanistan and elsewhere.

This is a most disturbing statement. Not only is the President considering the United States/Israel relationship as irrelevant as seen by having to "balance support with other American interests"... he is directly linking the safety of American troops to the lack of a peace agreement between the Jews and the Arabs in the Middle East. Is this going to bring American Jews the charge of "dual-loyalty"? This is a scary thought and anti-semitism at it's best.

This statement is also buying the Arab narrative of an "occupying Zionist" presence in the Middle East as the basis for all Muslim conflicts hook-line-and sinker. This is a dramatic departure from past American policy.

Of course we know that if Israel were no longer in existence there would be no conflict in the Middle East or around the world because the Arabs are a peace-loving group of people.

Let us not fool ourselves. The Obama administration has dramatically weakened and has undermined Israel's position on the world stage. The results should not surprise us. The UK has recently banned the Western Wall from Israeli tourism advertisements.

... a ruling by the UK's Advertising Standards Authority has taken things to new heights of absurdity. The ASA dealt with a complaint concerning an Israel Government Tourist Office advert that "the photograph featured for Jerusalem was of East Jerusalem" and therefore "the ad misleadingly implied that East Jerusalem was part of the state of Israel."

In other words, the Western Wall is no longer an accepted part of the Jewish state after 3000 years.

Israel has gone over and above to prove themselves as peace-makers in the face of terrorism. All the actions - withdrawing from Gaza, dislocating citizens to create a Jew-free zone... are considered null and void as far as Obama is concerned.

Obama will be proposing his own solution to the Jewish-Arab conflict. Don't forget that Samantha Powers is a foreign policy advisor to the president. Powers who has compared Israel's treatment of Arabs to the the massacre in Rwanda - even suggesting that Israel be left out of any decision making process.


Unfortunately, imposition of a solution on unwilling parties is dreadful. It's a terrible thing to do, it's fundamentally undemocratic …. And, unfortunately, it does require external intervention, which, very much like the Rwanda scenario, that thought experiment, if we had intervened early.... Any intervention is going to come under fierce criticism. But we have to think about lesser evils, especially when the human stakes are becoming ever more pronounced.

Is this where we are headed? Unilateral intervention by the United States in the Israel-Arab conflict?

Watching as this administration singlehandedly undermines Israel in the world's eyes, weakening it's support of a democracy that has wholeheartedly stood behind the United States over the last 62 years, an administration that is actively questioning Jewish loyalty during a time of war -- I must ask Jews who vote for the Democratic Party... why? Your support of the Democratic Party has not brought security to Israel or to Jews around the world, rather just the opposite (anti-semitism has doubled everywhere since Israel is seen as weak).

Please reconsider your support. The Jewish vote should not be taken for granted.

Other worthwhile reading/watching:
Never Again Should We Be Silent - by Ed Koch, former Democratic mayor of NYC

“I believe the Obama administration is willing to throw Israel under the bus in order to please the Muslim nations.” - Ed Koch television interview

The Solace of Poor U.S.-Israel Relations - by Daniel Pipes

Bipartisan House Letter - to Secretary of State Hillary Clinton with 327 signatures
Posted by Shira at 1:52 PM No comments:

A Voice from the Past

... the principles on which the constitutions of the American states rest, the principles of order, balance of powers, true liberty, and sincere and deep respect for law, are indispensable for all republics; they should be common to them all; and it is safe to forecast that where they are not found the republic will soon have ceased to exist.