The Price for "Peace" 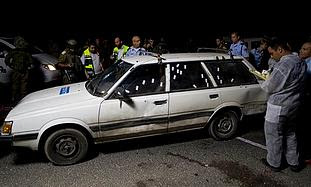 Here we go again. On the eve of "peace talks" two Jewish men and two Jewish women (one pregnant) have just been murdered on Israeli roads by Arab terrorists, presumably in order to "derail" these talks.

Mahmoud Abbas (aka terrorist Abu Mazen) has over the last few years repeatedly complained of Israeli settlements being *the* obstacle to peace. Meanwhile Hamas rockets have been flying into Israeli airspace and slamming into homes and schools.

Let us take a moment to reflect on this information. I believe I must be confused again - perhaps someone can enlighten me.

* 4000 year history linking the Jewish People to the Land of Israel - this includes the areas of Judea/Samaria (West Bank).
* The State of Israel is a recognized country by the United Nations (not that I'm a fan of the UN).
* The State of Israel is under attack by U.S. State Department labeled terrorist organizations - ie. Hamas, Hezbollah.
* The citizens of Israel are under attack by the Palestinian Authority and Fatah as well as Hamas and Hezbollah.

The basic question is - Israel has been perpetually under attack by those who do not believe in her existence in any form... shouldn't the burden of proof that they want real peace be on the people who attack Israel?

Israel has no responsibility to even attempt to make peace with those who have yet to show good faith - there's nothing new here. More talks about Israel making "concessions" in the name of peace. What concessions have the Arabs made? I have yet to see them.

Israel and the Jewish People have paid the price of peace yet again today. We have lost another four members of our family - what have we gained?

Must read: Lives - Not Statistics
Posted by Shira at 3:36 PM 2 comments: