News Roundup for the Week

Busy week in the news, and certainly not enough time to comment on all of it, so here's a short collection of thoughts. Enjoy.

In the nothing to see here category:
* Eric Holder: No Plans at DOJ to Investigate Secret Waiting Lists and Veteran Deaths at VA Hospitals
American deaths worth investigating? Really, why would Holder start now? The FBI's Fast and Furious program causing the death of border patrol agent Brian Terry (and countless Mexicans) didn't bring any accountability to the Department of Justice - no one was fired for this terrible program.


In 2013, the Federal government released thousands of illegal immigrants:
immigrants whom U.S. Immigration and Customs Enforcement released from custody last year there were 116 with convictions for homicide, 43 for negligent manslaughter, 14 for voluntary manslaughter and one with a conviction classified by ICE as “homicide-willful kill-public official-gun.”...
15,635 for drunken driving, 9,187 for what ICE labeled “dangerous drugs,” 2,691 for assault, 1,724 for weapons offenses and 303 for “flight escape” — a category that would seem to make them bad candidates for release.

Last, but not least - what's new?
Hamas TV: Giant, cuddly bee teaches children to "shoot Jews" and "smash them"
Yup, these are the guys that the "moderate" Palestinian Authority would rather reconcile with rather than making peace with Israel. It's really nothing new - we know that no matter if they are the "moderates" or the "extremists", they both hate the Jews - and are willing to teach their children to commit suicide in order to murder us.
And from the "moderates" - they have their own creative videos involving children.

My take on these "peace makers": The "Moderate" vs. "Extreme" Terrorists
Posted by Shira at 11:24 PM No comments:

A Response to Secretary of State Kerry

This is written by an anonymous friend (a Democrat no less) in response to Secretary of State Kerry's comment about the State of Israel becoming an apartheid state - a fantastic piece.

And why everyone who is coming to Mr. Kerry's defence is missing the point.

Peace comes only when both parties want it. Peace cannot be imposed. So long as the Palestinian interests are represented by those who expressly refuse to recognize Israel as a Jewish state, there will be no peace. The world had better get over their age-old perception of the Jews as something less than equal members of the human race, and accept the fact that Israel is and always will be a Jewish state. No less so than Saudi Arabia is a Muslim state, with its own religious laws imposed by a majority onto any minority living therein. No less so than England is a Christian state, with its monarch as the titular head of the Church of England.

Jews are never again going to be led into ovens because there is no other nation willing to accept them. Jews have a state and it is Israel. So long as that simple reality is beyond the acceptance of the Palestinians and other neighbouring Arab countries, there will be no peace. So long as Mr. Kerry and Mr. Obama and any of the other players on the world stage cannot get that simple fact in their heads as an absolute, then there will be no peace.

Apartheid? Let any Arab, any Palestinian, live in Israel and be a citizen - they can vote and they can live just as freely as any Jew. They can worship in their own mosques. They can go to school. They are full citizens within Israel. Funny, but a Jew living in virtually any Arab state would not have that same right. Most Palestinians would not even be given that right in most Arab states - if there is such empathy for their plight, why are those oil rich states not spending their dollars to enrich the lives of their brethren?

Apartheid? Because Israel has the right to decide that its existence is founded on it being a Jewish state? Does not every other nation have that same right of self-determination and self-definition?

Get over it, world. Come to grips with the fact that we are not going to let you apply a double-standard any longer. Israel is a Jewish state. Period. Jews have a homeland and Jews will defend themselves. Jews are not going to be told what is, or is not, acceptable based on standards not applicable to any other nation.

The day a Jew can live freely in an Arab state, maybe then we can consider peace. The day that the Palestinians stop teaching their children that Jews are vermin to be exterminated, and that the Holocaust is a myth perpetuated by Jews, then perhaps peace is possible. The day that Israel is no longer singled out for defending its borders after a rocket attack from the territories, while the world turns a blind eye to thousands of innocents being slaughtered in African nations, then maybe peace has a chance.

Until then, peace is not going to happen. Because so long as the Palestinians and the rest of the world refuse to acknowledge that Israel is a Jewish state, then there is no room for discussion. Nor should there be. Denial of that basic fact - and yes, it is a fact - is a denial of the security of every Jew in the world. Without Israel as a Jewish state, there is no security for any of us. There is no protection from the horrors of what took place only a generation ago in Europe. Because the Nazis and their followers, and a good number of ordinary citizens in European nations, were God-fearing Christians, and they had no moral issue with exterminating the Jews and sending them to ovens and gas chambers, And the Cossacks were also good, God-fearing folk, who commenced systematic harassment and murder of the Jews through pogroms. And the Spanish Inquisition had the church behind it when Jews were forced to convert for fear of death. And history keeps repeating itself and would continue to do so, with the exception that now there is a Jewish State, Israel.

When a human being can be branded with a number on their arm, like cattle branded before slaughter, then to be perfectly honest, those being branded lose their ability to trust in the inherent goodness of others. The fear of God did nothing to stop millions from being slaughtered by their neighbours. And so when trust in human decency fails, and no place can truly be called safe, or home, we look to shape our own security. Our own home. Our own defence.

Mr. Kerry, get over it. Tell your boss the same thing, and have your ambassador to the United Nations listen up too. Israel is a Jewish state. And until you can get the Palestinians and their supporters to accept that, then you are wasting your time flying to the Middle East.

We, as Jews, are not asking you or anyone else to change your beliefs. Pray to Jesus if you are a Christian - Israel affords you that right, unlike many Arab nations. Pray to Allah if that is your belief too - in Israel, you can be who you are. And as your neighbours here in the Diaspora, you won't find us uttering a single word about what you believe in. We don't claim to have a monopoly on what is right or what is the truth. We accept that everyone has the right to worship God as they see fit, so long as it does not harm anyone else. Be who you are.

Afford us the same dignity, however. And if you cannot, or will not, then that is all the more reason why we as Jews need Israel as a Jewish state.

And as the only real democracy in the Middle East, you need Israel as a Jewish state too.
Posted by Shira at 9:10 PM No comments: 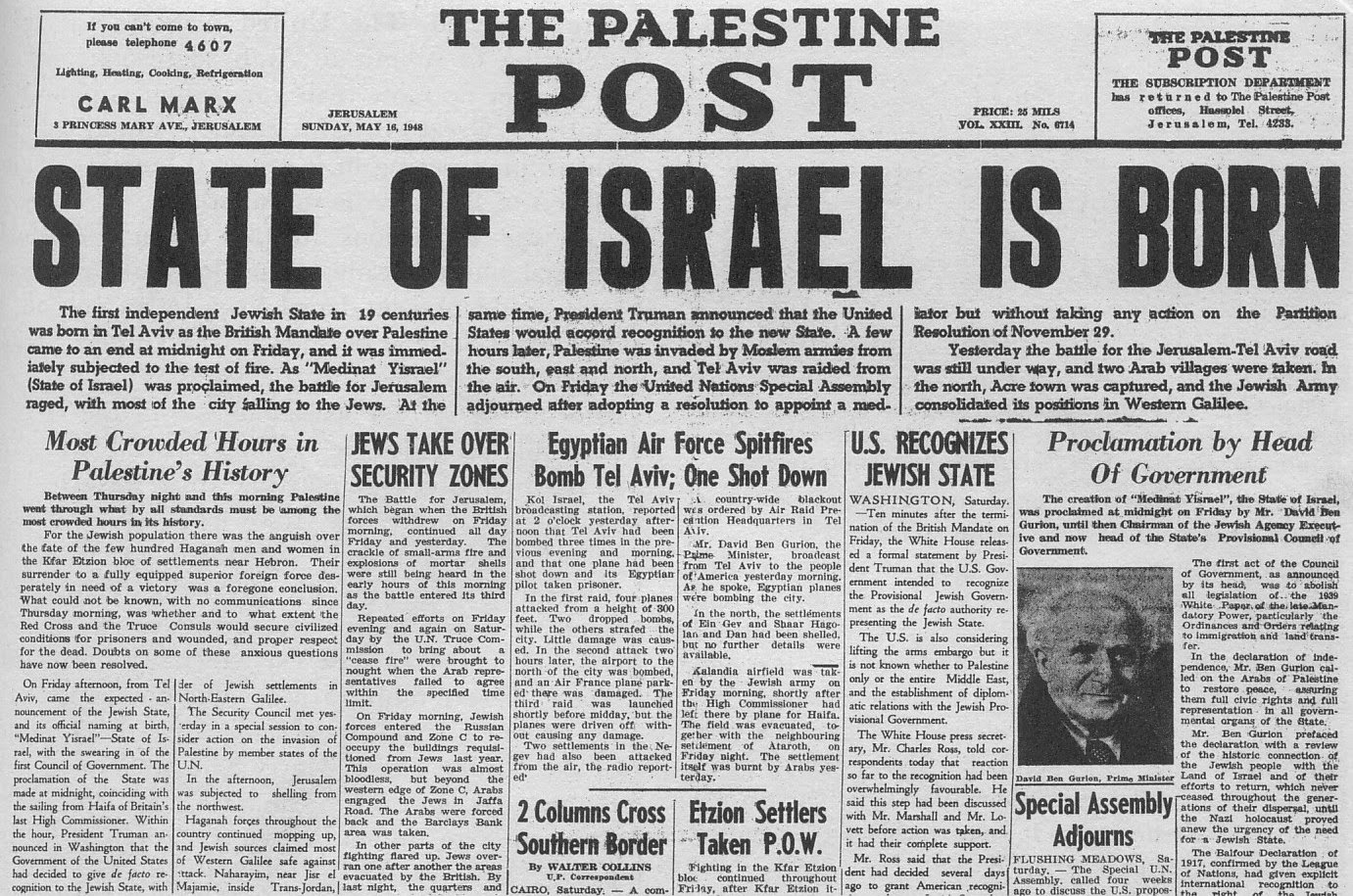 The State of Israel was re-born 66 years ago in 1948. After almost 2000 years of exile, we have returned to the Holy Land. Given to us by G-d, not by the United Nations. We are proud Jews, happy to be finally home. Happy Birthday Israel.
Posted by Shira at 11:06 PM 1 comment:

On the day preceding Israel's Independence Day, we commemorate Yom HaZikaron, Israel's Memorial Day, remembering those who fell as soldiers defending Israel and as victims of Arab Terror.

We pray for those who have lost their lives and for their families.

PM: ‘We would not be here without their sacrifice’
Posted by Shira at 11:41 PM No comments: