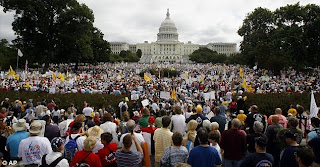 How the information outlets are covering this gathering.

UK Mail Online: Up to Two Million March to US Capitol to Protest Against Obama's Spending in 'Tea-Party' Demonstration

MSNBC: Protesters Vent at Obama, Spending
Posted by Shira at 12:30 AM 2 comments: Patrick Henry and the Land of Israel

No shockers here. The European Union's foreign policy chief Javier Solana has called on the United Nations to unilaterally declare Palestine a state without waiting for an agreement between the Israelis and "Palestinians".

Of course we don't expect much from the European Union or the United Nations for that matter - but just to reiterate the ridiculousness of the situation. Israel has attempted again and again to make peace. Negotiations with people who have no interest in making peace.

While making these attempts at peace - Israel has weakened herself. No other country in the world would be surrounded by countries that don't recognize her existence and have called for her destruction and continue to weaken herself militarily in the hopes that something will change. To those who say that some of those surrounding countries do have peace treaties with Israel - I ask if those treaties will hold when the dictators of those countries are overthrown or if the balance of power moves away from the Jewish state. Who will guarantee Israel's safety? The United Nations?

Jews are a hopeful people. Each and every peace treaty points to that hope of peace for the future.

It is natural to man to indulge in the illusions of hope. We are apt to shut our eyes against a painful truth and listen to the song of that siren... Are we disposed to be of the number of those who, having eyes, see not, and having ears, hear not, the things which so nearly concern their temporal salvation?
... I have but one lamp by which my feet are guided, and that is the lamp of experience. I know of no way of judging the future but by the past.
.... What terms shall we find which have not been already exhausted? Let us not... deceive ourselves any longer... we have petitioned; we have remonstrated; we have supplicated... Our petitions have been slighted; our remonstrances have produced additional violence and insult... In vain, after these things, may we indulge the fond hope of peace and reconciliation. There is no longer room for hope....
It is in vain to extenuate the matter. Gentlemen may cry Peace! Peace! but there is no peace.

Patrick Henry spoke these words over 200 years ago, but could have easily spoken them today. The lessons of history must not be ignored or relegated to books.

Jews have lived by The Book for 4000 years and have a long history of success and failure. It is when we study our history and find our strength in G-d that we succeed and when we don't... we fail. There are many Jewish leaders to learn our lessons from, but that isn't enough for some - we may also take our lessons from those non-Jewish leaders as well. Thank you Patrick Henry.
Posted by Shira at 1:10 PM No comments:

Look! It's the "All-Purpose" Grandma! We can use her anywhere... in any speech... on any topic!

We'd never heard of Madelyn Dunham, Barack Obama's white grandmother, before March 18, 2008 until she was invoked in Obama's race speech in Philadelphia as a way to defend a 20 year friendship with his pastor Reverend Jeremiah Wright.

Insert collective gasp. He admits that this woman sacrificed for him and raised him, but then goes on to broadcast on national television the fears that she privately confided in him. Where is his sense of decency? But wait, there's more! In a follow-up radio interview Obama tries to clarify his remarks:

The point I was making was not that my grandmother harbors any racial animosity, but that she is a typical white person. If she sees somebody on the street that she doesn't know there's a reaction in her that doesn't go away and it comes out in the wrong way.

Aside from the audacity of claiming that all whites are racists, what's fascinating here is that we don't actually know her views on other ethnic groups at all. We're taking his word for all of her insecurities since his campaign never made her available for comment. In fact, people who knew her were shocked by his remarks.

" I never heard Madelyn say anything disparaging about people of African ancestry or Asian ancestry or anybody's ancestry," Slom [Sam Slom, a Bank of Hawaii economist then, who is now a Republican state senator in Hawaii] said.

We heard about Dunham more recently within the context of the current health care debate. In an April 2009 New York Times interview, President Obama was discussing end-of-life care when we hear his grandmother invoked again.

…I mean, I’ve told this story, maybe not publicly, but when my grandmother got very ill during the campaign, she got cancer; it was determined to be terminal. And about two or three weeks after her diagnosis she fell, broke her hip….

Is Obama saying here that it's too expensive to do surgery on "old people" if they'll only live a little while longer? What about Jane Sturm who asked about her mother who's now 105 who had a pacemaker put in five years ago? "Is there any consideration that can be given for a certain joy of living... or is it just a medical cutoff at a certain age?" Obama replied, "I don't think that we can make judgments on people's spirit..." but that "maybe you're better off not having the surgery but taking the pain killer." In other words, we're saving money on the backs of the elderly and terminally ill patients.

Grandma was brought up once again in Colorado just last week,

What you can't do... is start saying things like, we want to set up death panels to pull the plug on grandma… I mean, I just -- first of all, when you make a comment like that -- I just lost my grandmother last year. I know what it's like to watch somebody you love, who's aging, deteriorate, and have to struggle with that.

Awww. Now we're all supposed to feel bad for Obama. He lost his grandmother, how dare anyone criticize his health care plan. It’s all about him rather than the end-of-life health care rationing that's certainly coming down the road if the plan is passed through Congress. By making it personal, he’s closed the discussion.

Madelyn Dunham has become the all-purpose excuse for anything that Obama needs a pass on. He needed a way out of his predicament with Reverend Wright. He needed a pass through the health care debate and the hard questions by calling upon the memory of his grandmother and what pain he went through when having to make decisions about her health.

I wonder what the next big crisis Obama will face in the future when we'll see his grandmother invoked once again to give him cover.
Posted by Shira at 2:32 PM No comments: