Every Day is Memorial Day 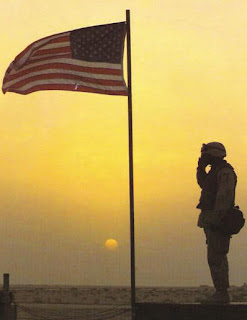 They will not come in swinging line,
They will not march along the street,
But they will see each tender sign
We make for those we long to greet.
They'll see the tears in gentle eyes
That watch the broken ranks go by,
They'll hear the mothers' sobs and sighs
And understand the reason why.
The missing brave, for whom we yearn
In victory's hour, will all return.

When they return to sound of cheers,
And all their cruel tasks are done,
The shouts the living soldier hears
Will also reach the absent one.
When all the battle flags are furled
And peace has come to every land,
The joy that reigns throughout the world
The dead will know and understand.
They will be near to hear and see
And share in victory's jubilee.

Feelings... nothing more than feelings...

Are you singing along yet? Cue Tina Turner on the second soundtrack.

Let's change "love" to "law" and we have the Obama pick for the next Supreme Court Justice.

What's law got to do, got to do with it
What's law but a second hand distraction...

The law is a definite distraction. We want someone with feelings. We want a person who will understand and feel for the little guy who has been taken advantage of by those big, mean conglomerate tycoons who just want to make a buck off the working class. Proles Unite!

President Obama is being urged by leading Democrat Senate Judiciary Committee Chairman Patrick Leahy (D-Vt.) to pick someone "from outside the judicial monastery - someone who has had some real-life experience". And that wonderful, articulate Democrat of the Moment Arlen Specter believes that having eight other justices on the bench is enough. I agree. We have way too many judges on that Court. Let's throw in a social worker or a psychiatrist into the mix. Let's try and understand the underlying issues that plague the system.

Justices are hearing cases about labor disputes and industry. That's an easy one for our Supreme Social Worker. Just take the company and give the union 55% ownership. Government will get another 10%.

Freedom of speech is also something that plagues our system. Those who dare to criticize the Messiah Obama gets their reputation attacked by the mainstream media and by the Messiah Himself. Remember those infamous two words "Fairness Doctrine"? Another slam dunk by our Supreme Social Worker. Repeat: It's important that everyone feels heard and their grievances understood.

"Empathy and Understanding" are the key words here spoken by the Messiah Himself. Our Supreme Social Worker must show these qualities and look past those petty laws to see the real issues at hand. I, myself, look forward to a time when I will be judged by the victimhood status I hold rather than the laws I have broken.

Feelings... nothing more than feelings.
Posted by Shira at 6:39 PM 2 comments: