The 'Audacity of Hope' and the U.S. Constitution

Aid boat seeks to sail as 'Audacity of Hope'

A group calling itself U.S. Boat to Gaza is seeking $370,000 in the next month to send an aid ship to the Gaza Strip that would be named after President Obama's best-selling book "The Audacity of Hope."

Rashid Khalidi, a friend of Obama who is active in Palestinian causes, has signed the appeal, part of a broader effort to thwart the Israeli blockade of the Hamas-controlled Palestinian enclave.

Khalidi, a Columbia University professor, briefly became the subject of controversy during the 2008 presidential campaign when Sen. John McCain's camp tried to make an issue of what it called Obama's suspect friendships. The news of Khalidi's involvement in the boat appeal has led the National Review to call for a Justice Department probe of the academic on grounds he may have provided material support to a terrorist group.

The White House declined to comment. Khalidi said he was not aware the boat would be named after Obama's book when he agreed to add his name to the list of sponsors.

"But if the name is a problem for the administration, it can simply insist publicly that Israel lift the siege: end of problem, end of embarrassment," he wrote in an e-mail.

This is a brilliant publicity move by Khalidi to force Obama's hand on the "Palestinian issue". We know that Obama was a supporter of the "cause" back in Chicago and has continued his support by having advisors on the issue. We will see what happens when Audacity sails.

What's also interesting but not picked up by the media is that while the infamous Turkish "aid" ship was running the Gaza blockade, the United States Supreme Court was delivering their decision about sending aid to other known terrorist organizations, "Partiya Karkeran Kurdistan (PKK) and the Liberation Tigers of Tamil Eelam (LTTE), which aim to establish independent states for, respectively, Kurds in Turkey and Tamils in Sri Lanka". The issue before the court was whether sending aid to these organizations would be protected under the First Amendment free speech clause. Both these groups have been labeled terrorist organizations by the U.S. State Department. The entire opinion is worth reading. The following quote is from the syllabus of the opinions.

It is a federal crime to “knowingly provid[e] material support or resources to a foreign terrorist organization.” 18 U. S. C. §2339B(a)(1). The authority to designate an entity a “foreign terrorist organization” rests with the Secretary of State, and is subject to judicial review. “[T]he term ‘material support or resources’ means any property, tangible or intangible, or service, including currency or monetary instruments or financial securities, financial services, lodging, training, expert advice or assistance, safehouses, false documentation or identification, communications equipment, facilities, weapons, lethal substances, explosives, personnel (1 or more individuals who may be or include oneself), and transportation, except medicine or religious materials.” §2339A(b)(1).... Whether foreign terrorist organizations meaningfully segregate support of their legitimate activities from support of terrorism is an empirical question. Congress rejected plaintiffs’ position on that question when it enacted §2339B, finding that “foreign organizations that engage in terrorist activity are so tainted by their criminal conduct that any contribution to such an organization facilitates that conduct.” §301(a), 110 Stat. 1247, note following §2339B. The record confirms that Congress was justified in rejecting plaintiffs’ view. The PKK and the LTTE are deadly groups. It is not difficult to conclude, as Congress did, that the taint of their violent activities is so great that working in coordination with them or at their command legitimizes and furthers their terrorist means. Moreover, material support meant to promote peaceable, lawful conduct can be diverted to advance terrorism in multiple ways. The record shows that designated foreign terrorist organizations do not maintain organizational firewalls between social, political, and terrorist operations, or financial firewalls between funds raised for humanitarian activities and those used to carry out terrorist attacks.

Chief Justice Roberts goes on to even bring Hamas into his opinion,

Material support meant to “promot[e] peaceable, lawful conduct,” Brief for Plaintiffs 51, can further terrorism by foreign groups in multiple ways. “Material support” is a valuable resource by definition. Such support frees up other resources within the organization that may be put to violent ends. It also importantly helps lend legitimacy to foreign terrorist groups legitimacy that makes it easier for those groups to persist, to recruit members, and to raise funds—all of which facilitate more terrorist attacks...“[I]nvestigators have revealed how terrorist groups systematically conceal their activities behind charitable, social, and political fronts.” M. Levitt, Hamas: Politics, Charity, and Terrorism in the Service of Jihad 2– 3 (2006). “Indeed, some designated foreign terrorist organizations use social and political components to recruit personnel to carry out terrorist operations, and to provide support to criminal terrorists and their families in aid of such operations.” McKune Affidavit, App. 135, ¶11; Levitt, supra, at 2 (“Muddying the waters between its political activism, good works, and terrorist attacks, Hamas is able to use its overt political and charitable organizations as a financial and logistical support network for its terrorist operations”).

How is what was decided in Holder vs. Humanitarian Law Project not being connected to the ships attempting to bring supplies to Gaza? These "activists" - especially any Americans - should be prosecuted for bringing material support to a U.S. State Department declared terrorist organization. There is no difference between one terrorist and another - it is illegal to support any of them. A murderer is a murderer, no matter how infamous the 'cause'. I am glad to see the Supreme Court clarify this issue. It would be fun to watch if the 'Audacity' would have the audacity to leave from the United States with material support for Hamas - would Holder, who prosecuted this case, go after them with this ruling? It would be nice to think he would, but that would be wishful thinking on my part.

US to Gaza: A Charade That Must be Stopped
Posted by Shira at 2:35 AM No comments:

Brother, Can You Spare a Dime?

What ever happened to "charity begins at home"?

It seems that liberal leaders are so busy spending everyone else's money that they forget this famous axiom.

Everyone knows about President Obama's African half-brother who lives in a shack on less than a dollar a month. And let's not forget his aunt who lived in the United States public housing illegally until she gained asylum under undisclosed reasons.

In relatively new news we find out about former President Bill Clinton's niece Macy Clinton living on food stamps. Her infamous father, Roger Clinton, owes her thousands of dollars in child support going back over years of non-payment.

Both liberal leaders - the Obamas and the Clintons are millionaires. I do not begrudge them their money - I just wonder if these leaders could spare a dime to support their own flesh and blood.

Both the Clintons and Obamas say they care about the 'good of the people'. Words are cheap - let's see those words put into action.
Posted by Shira at 1:58 PM No comments:

Good Luck to the Unarmed Homeowner

Oakland, California is in trouble - more specifically the citizens of Oakland are in a lot of trouble.

Oakland's police chief is making some dire claims about what his force will and will not respond to if layoffs go as planned.

Chief Anthony Batts listed exactly 44 situations that his officers will no longer respond to and they include grand theft, burglary, car wrecks, identity theft and vandalism. He says if you live and [sic] Oakland and one of the above happens to you, you need to let police know on-line.

Fascinating stuff. It means that the homeowner is on his own, and criminals know it. Say 'good-bye' to your car - don't worry, you can report the theft on-line. Vandalism? Minor stuff. Don't have email? Oh well.

Burglary? This one worries me a bit. Does this mean that if a criminal is breaking into your home you should sit back and let him take your stuff? Should you show him around the house pointing out the valuables? What about your personal safety?

Gun control advocates always speak of the police always being around to save you in case of trouble. In this case we see this isn't true. What adds salt to the wound is that California has very tight restrictions on gun ownership. What are homeowners supposed to do to protect themselves and their families?

I wish the citizens of Oakland much luck. They're going to need it.
Posted by Shira at 10:50 AM No comments:

A Rabbi and an Imam walk into a bar... 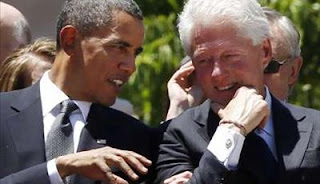