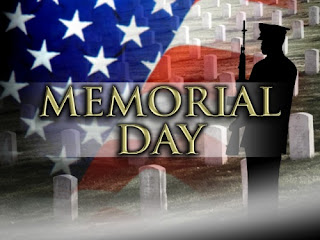 This coming Monday, May 31st is Memorial Day. The day we remember those who made the ultimate sacrifice for freedom.

In addition to going to the beach and barbecuing the hot dogs, take a moment to understand the true solemn meaning of the day.

Freedom is never free, and thousands of American soldiers over the years have given their lives to bring freedom and defend freedom here in the United States and around the world.

In honor of Memorial Day do something to honor those who have fallen. Find a local military cemetery and volunteer to help keep it weed-free. Place flowers on graves left unremembered. Find out what you can do to help veterans today.

Rather than let this day go unnoticed and pass by as just another 3 day weekend, please do your part to remember those who have given you the most precious gift of all, freedom.

Email ThisBlogThis!Share to TwitterShare to FacebookShare to Pinterest
Labels: "memorial day history", "what is memorial day"

A well regulated militia, being necessary to the security of a free state, the right of the people to keep and bear arms shall not be infringed. - 2nd Amendment to the U.S. Constitution

I just wanted to direct everyone's attention to a list of 2nd Amendment links that I have posted on the sidebar. This is not a comprehensive list by any stretch. These are some of the national organizations that have been active in the fight against gun control. There are many local organizations that are also quite active (though not listed here) - it's important to be involved in both. Take a look through the list and please take a moment to check out the various websites.
Posted by Shira at 3:19 PM No comments:


Today is the day we celebrate the liberation of the Western Wall, and Jerusalem from Jordanian hands. From 1948-1967, Jews were unable to visit the holiest site in Judaism.

We must also remember on this day the liberation of Rachel's Tomb in Bethlehem, and the liberation of Hebron, where the Jewish Patriarchs (Abraham, Isaac and Jacob) and Matriarchs (Sarah, Rebecca, Leah and Rachel) are buried. Jews were also unable to pray at their graves up until 1967.

We must understand that if there is to be religious freedom at any location in Israel - those places must stay in Israeli hands. There is no freedom of religion under Muslim rule.
Posted by Shira at 1:56 PM No comments:

Email ThisBlogThis!Share to TwitterShare to FacebookShare to Pinterest
Labels: "kotel"

Does the United States need Israel?

The more I have thought about the current situation that Israel finds itself, vis-a-vis the United States, the more I realize that we need to re-examine the relationship.

Not so long ago the world had two super-powers trying to outmaneuver each other; trying to gain footholds in various places around the world; using proxies to fight the hot wars in order to avoid all out conflict. This is no longer the world we live in - that world no longer exists.

Instead, the United States is the only existing super-power with the threats of nuclear-armed state actors and terrorist organizations around the world. In many ways, it is a more dangerous world than we had previously faced 20 years ago. These rogue states and terrorists answer to no one but themselves and their dangerous ideology.

While Israel may have been a good friend to the United States in the fight against the Soviets, it is no longer needed in that position since the collapse of the USSR. In fact, Israel may be seen by some as a detriment to the US.

The United States is at war with Islamic terrorists. As such, the US has to be able to negotiate with the Arab/Muslim countries in order to try to stop these terrorists. There is also the US dependency on Arab oil.

Americans have a strong tendency to think that everyone else believes in the same truths as we believe. We have codified these beliefs in the Declaration of Independence and the Bill of Rights. We believe that "all men are created equal" and that our government cannot establish an official religion for the country - that all are allowed to worship freely. The beauty of the United States is E Pluribus Unum - 'out of many, one', we all believe in these codified beliefs.

We take these truths for granted - and are blinded by them at the same time. We assume that these truths are universal, that others believe in them as well. It's not true - especially in the Muslim world. As a wise man once said - this is the Middle East, not the middle west.

Some Americans believe that we can negotiate our differences away - in other words "why can't we all just get along."
In order to fully understand the differences between American ideals and the Muslim world we need to look at the ideology of the Islamic terrorists since they are on the forefront of the conflict.

World View.
To these Muslims, the world is divided into two parts. The first part is the Dar al-Islam, the House of Islam. This is the area that, according to the Koran, is under Muslim rule. The second part is called Dar al-Harb, the House of War. This refers to the area of the world that is under non-Muslim control. Between these two parts there will always be perpetual state of war. They believe that this will continue until the non-Muslims either accept Islam, or submit to being second class citizens to Muslim rulers.

Some Muslims argue that they only fight defensively - not offensively. This is true, depending on your definition of "defensive". Muslims believe that any land that had come under Muslim rule at any point in time in history - belongs to the Muslims, and if it is currently under non-Muslim rule it must be defended against those non-Muslims. That is the definition of "fighting defensively." A bit problematic to say the least.

The Muslim world view is diametrically opposed to the American world view.

We seek to instigate the Muslim community to get up and liberate its land, to fight for the sake of Allah, and to make the Shari'a the highest law, and the word of Allah the highest word of all. - Osama bin Laden, June 10, 1999

Democracy is based on the principle that the people are the source of all authority...In other words, the legislator who must be obeyed in a democracy is man, and not Allah. That means that the one who is worshipped and obeyed and deified, from the point of view of legislating and prohibiting, is man, the created, and not Allah. That is the very essence of heresy and polytheism and error...

Under democracy, a man can believe anything he wants, choose any religion he wants, and convert to any religion whenever he wants, even if this apostasy means abandoning the religion of Allah... This is a matter which is patently perverse and false...

Democracy is based on the principal [sic] of 'freedom of expression', no matter what the expression might be, even if it means hurting and reviling the Divine Being [Allah] and the laws of Islam, because in democracy nothing is so sacred that one cannot be insolent or use vile language about it.

Democracy is based on the principle of freedom of association and of forming political parties and the like, no matter what the creed, ideas, and ethics of these parties may be... voluntary recognition of the legality of heretical parties implies acquiescence in heresy... Acquiescence in heresy is heresy... - Abu Mus'ab al-Zarqawi, January 23, 2005

Democracy and parliaments, my brothers, are from the religion and desires of infidels... Democracy means the rule of the people... which means that who is to be obeyed and worshipped is not Allah. - Abu Maysara, March 2, 2005 (The World According to Al Qaeda by Brad K. Berner)

With this understanding behind us we can better understand the current situation as a Clash of Cultures. Democracy versus Muslim theocracy - Sha'ria Law.

Rather than attempt to appease those who violently disagree with the freedoms we take for granted, the United States must stand firm against them. These are the terrorists and rogue states that support them. They cannot and must not be negotiated with. The United States must support those countries that believe in individual freedoms and democracy. This includes the State of Israel.

While Israel is considered a "Jewish" state, it is also clearly a democracy - representing both Jews and Arabs in its parliament. Freedom of speech and assembly, freedom of the press, and freedom of religion are guaranteed to all.

The United States must stand strong with all democracies in this Clash of Cultures, and not sell our allies short in order to placate Muslim sensibilities. Israel is at the forefront of this Clash; a country attempting to create a balance of security needs and individual freedoms. There is much the US could learn from Israel as we have begun to realize in our post-9/11 world.

It's time for the United States to treat Israel as an equal - rather than as footnote in the anti-Communist strategies of the 1980s. Those days are over. Welcome to the War for Democracy.
Posted by Shira at 10:44 AM No comments: