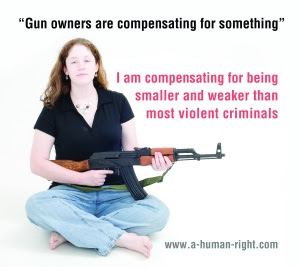 As a pro-gun advocate and gun owning American woman living in Canada, I am generally frustrated by the anti-gun ignorance that pervades Canadian society.

I was thrilled tonight to watch Byline, with host Brian Lilley, on the Sun News Network. One of the female reporters had found the Sharon Gun Club, a shooting range outside of Toronto, where they are inviting women to try their hand at shooting different types of guns.

This report is so important.

This is a huge step forward in promoting something so basic - the idea of self-defense. That a woman should be able to defend herself and her family from those who want to hurt them. Nothing equalizes a bad situation better than a 9mm or a .45 caliber.

Hats off to Brian Lilley for covering and bringing the gun debate to the fore.

Note: The report was focused on removing the fear of guns that women have by having an all-women shooting experience as well as bringing women to the sport of shooting. But I believe that once women understand that guns are a tool to be used safely - they will see how it can be used in self-defense. This report was a huge step forward in the gun conversation.

* Brian Lilley's blog post about responses to his report.
Posted by Shira at 11:28 PM

I'm against women playing with guns. Years ago I took my ex-wife to the pistol to learn how to shoot IPSC (practical target shooting competitions). She did so well at it she beat my ass regularly and went on to compete internationally winning many trophies - the rest was down hill from there ;-)

With a Female's natural superior eye-hand coordination the male domination of the shooting sports is in peril!!

I've been planning on holding a class for women in the metro-Detroit area just to encourage more women to shoot, and be introduced to the hobby/self-defense. I haven't gotten around to it yet, but the interest has been astounding (and men want the class too)! Aside from being fun and a great stress reliever, I think it's ridiculously important to a woman, her protection, and her self-confidence.

And then I'll take on gun rights in San Francisco next.

Good luck in San Francisco. You do realize it's the craziest city in California?


I hope Talya will step out into the unknown and just fly with her idea. Here in BC we have what appears to be, (MAYBE) the only women's shooting club in Canada. (If I'm wrong, we'd love to connect with the others!)

In one year, we've exploded into a membership of 150. Most came with little or no experience, and had always wondered where to start. Our events this year have been mostly introductory, in keeping with our goals to expose our members to the different shooting disciplines in Canada. The aim (pun intended) is to inspire enough interest and confidence to enable them to comfortably take part in the groups of their choice.

We believe that an exclusively female group is counterproductive on all fronts, so we give them the confidence to show up for practices wherever their interest directs them. We're pleased they and our men members are rapidly realizing that, "Hey, we're all just shooters!"

GO TALYA!! Bill, send us your wife - we have some members just like her. You aren't the only guy with this "problem!"