The War on Jewish History 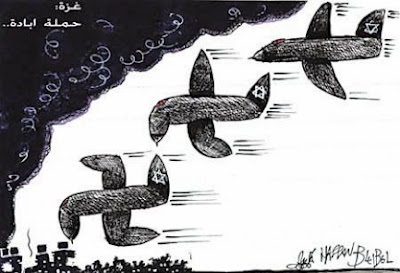 I just came across these two must read articles.

The first is the archeological find of a small gold bell. Why is that important? The Arabs and most notably the "Palestinians" have a habit of denying and destroying any Jewish connection to the Land of Israel. This bell dates back to the 2nd Temple period and may have actually come from the cloak of the Jewish High Priest. It's nice to see history come alive with finds like this - proving what we already know - Jews have lived in the Land of Israel for 3000 years.

The second article deals with the Holocaust denial in "Palestinian" schools.

UNRWA, which provides assistance for Palestinians in Gaza and the West Bank, was shocked when Palestinian school officials categorically rejected a request to insert Holocaust studies in their school curriculums....

The Palestinian Authority on the other hand does not encourage any instruction about that dark period in history and it remains out of bounds. UNRWA (United Nations Relief and Works Agency for Palestine Refugees in the Near East), which provides assistance for Palestinian refugees in Jordan, Lebanon, Syria, Gaza and the West Bank, was shocked a few weeks ago when Palestinian school officials categorically rejected a request to have Holocaust studies inserted to the school curriculum as part of the education on human rights. The UNRWA Palestinian Workers Union explained to an embarrassed UNRWA management that "teaching the Holocaust to Palestinian children may confuse them."

I'm really not sure why UNRWA was so shocked by this Holocaust denial. It's been rampant for years within "Palestinian" society. Moderate Mahmoud Abbas, head of the Palestinian Authority, wrote his doctoral thesis on the collaboration between the Zionists and the Nazis, in essence denying the atrocities of the Holocaust.

I'm not one to cry anti-semitism at every turn. I don't bring out the Holocaust in every conversation. I really don't even care if people like Jews - as long as they don't try and hurt us or deny our history. By denying the Holocaust - a planned execution of 6,000,000 people, among them 1.5 million children - it proves that these are people that have no interest in making peace and only in making war.

Denying 3000 years of Jews living in the Land of Israel - and destroying the archeology that proves it... is war.

Denying the execution of 6 million innocents simply because it doesn't fit their narrative ... is war.

It's time to stop pretending that the "Palestinians" are partners in this 'peace' process. A people who deny our existence in history and deny the loss of millions of our people are at war with us. There will be no peace.
Posted by Shira at 11:37 AM