The "Moderate" vs. "Extreme" Terrorists 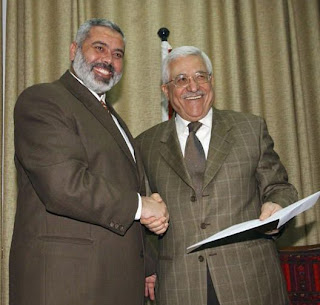 Representatives of Fatah and Hamas agreed on Sunday to a mutual release of political prisoners, Palestinian news agency Ma’an reported.

Fatah’s Azza al-Ahmad and Hamas’s Mousa Abu Marzouk met in Cairo on Sunday in an attempt to rekindle reconciliation talks that hit a snag in July when the two parties could not agree on the formation of a unified government.

Fatah, the ruling faction of the Palestinian Authority (PA), is in talks with the well established terrorist organization Hamas in the Gaza Strip. If the PA are supposed to be the "moderates" and Hamas are the "extremists" what does this tell us?

It goes on to say:

In reality, this "new" Palestinian Charter is an addendum to the Basic Charter - which includes the destruction of Israel.

How is this different from from the new charter?

Fatah is the armed wing of the Palestinian Authority. We see what their interests are by their symbol.

Their background includes a map of the whole of Israel - not the so called West Bank or just the Gaza Strip. Of course the additions of the machine guns and a grenade are nice touches.
The Hamas charter is not much different from the PA Basic Charter.

Take a look at the Hamas flag. 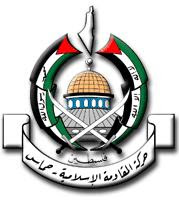 Tell me again what differentiates the "moderates" from the "extremists" exactly?
Posted by Shira at 12:08 AM

The only difference that I can see is that Hamas' shield has slicker artwork. Other than that the organizations are two sides of the same coin.