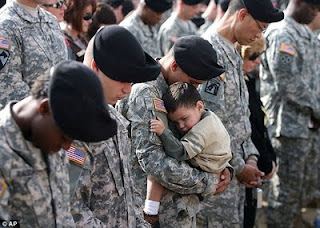 These are the 13 brave soldiers who were murdered by Malik Nidal Hasan, an Islamic terrorist, at Fort Hood on November 5th.

It is impossible to ignore the fact that Hasan is an Islamic terrorist. All who knew Hasan were aware of his extreme Muslim views.

His presentations for school were often laced with extremist Muslim views, one source said.

"Is your allegiance to Sharia [Islamic] law or the United States?" students once challenged Hasan, the source said.

It is truly a disgrace that Hasan was allowed to remain in the military. This was a terrorist act - plain and simple.

Amazingly enough - there are still some who are not aware that the attack on Fort Hood was conducted by an Islamic terrorist. Here are a few tips to help you out if you're "not sure" you know a terrorist.

1.) If your neighbor begins giving away his belongings, including multiple copies of the Koran, while suggesting that he is "going away," you might know a terrorist.

2.) If your health care professional suggests that the answer to your depression, marital ills, loneliness, or post-traumatic stress is to begin praying to Allah and attending the local mosque, you might know a terrorist.

3.) If a colleague from your department leading a seminar veers off topic and begins suggesting that infidels should be decapitated and have boiling oil poured down their throats, you might be working with a terrorist.

4.) If a guy dressed up like Osama bin Laden shows up at the local convenience store, or appears at the office wearing a shalwar-kameez, you might be in store for some live ammunition directed your way. And you are probably in the presence of a terrorist.

5.) If the subject of your electronic surveillance repeatedly attempts to contact an Imam who is also an Al-Qaeda recruiter known to be in contact with suppliers to Osama bin Laden and associates of the Blind Sheik al Rahman and whose phone number is found in Ramzi Binalshibh's apartment, you might be surveilling a terrorist.

6.) If someone in your office, shop, store, mall, street or stadium yells "Allahu Akbar!" you had better run or seek cover. At this point you definitely know a terrorist.

This would be funny if it weren't sad in the wake of the Fort Hood massacre. It's time to bury our honorable dead and identify this attack for what it was - an Islamic attack on American soil, no "ifs", "ands" or "buts" about it.
Posted by Shira at 11:30 AM