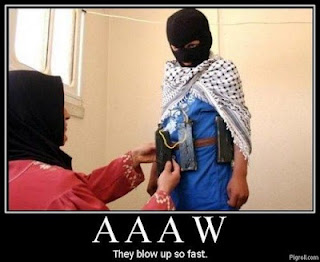 Stop the presses... the "Palestinians" are whining again. They've been insulted. Mitt Romney, while in Israel, said that the "Jewish culture" has made Israel successful. The "Palestinians" find this to be a racist comment.

Of course they also thought that taking a moment of silence during the opening ceremonies of the Olympic Games to remember the eleven murdered Israelis during the 1972 Munich Olympics was "racist" as well - I assume that's because they were the murderers... and murdering Jews simply because of their religion might identify the "Palestinians" as the real racists and they didn't really want that made public on the world stage.

Then again, the International Olympic Committee (IOC) obliged them - rather than pointing out to the world the hypocrisy of the "Palestinians" as well as the Muslim world who had threatened to boycott the Games.

Romney did the right thing and did not appease the "Palestinians" by pretending that their "culture" is equal to the "Jewish culture". To begin with, Jews believe in the sanctity of life. The "Palestinians" clearly do not. Hey, hey, how many buses have you bombed today? - comes to mind. Jews have a strong focus on education and taking care of the next generation. The "Palestinians" clearly do not. Summer camps named after so-called martyrs that teach kids how to to shoot machine guns and blow themselves up do not constitute being "educational". Surprisingly enough, neither are school textbooks that portray Christians and Jews as pigs, dogs and monkeys. Children's television programming with children singing about "jihad" and "martyrdom" wouldn't fall under "educational" either.

One has to wonder about the "Palestinian culture" of which they are so proud.

To show support for the Jewish culture which has contributed to Western Civilization as a whole and to the world community through amazing medical, technological and other breakthroughs (Nobel Prize winners) doesn't require a person to be a rocket scientist, but it does require honesty and, it seems, a little bit of backbone. It's nice to finally see these traits in a presidential candidate. It's about time.
Posted by Shira at 12:17 AM