The 1st Amendment and Political Speech 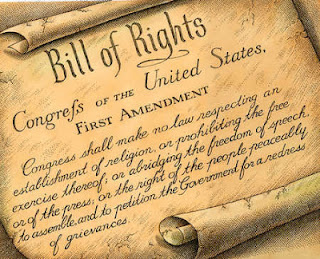 While we're in the thick of the political season, it's very easy to dislike the rhetoric being thrown around - but we should understand how lucky we are to have the right to speak our minds. Protection of political speech was the main reason for the inclusion of "freedom of speech" and the press in the 1st Amendment to the United States Constitution.


Congress shall make no law respecting an establishment of religion, or prohibiting the free exercise thereof; or abridging the freedom of speech, or of the press; or the right of the people peaceably to assemble, and to petition the Government for the redress of grievances.

Keep in mind other places around the world where political speech is not protected. For example, we can point to Russia and the arrest and imprisonment of the "girl band" Pussy Riot. They received a sentence of two years in prison for essentially doing not much more than the crime of trespassing - oh and by the way, "singing" against Russian President Vladimir Putin, while they were there.

The right to speak our minds (within the limits set by the US Supreme Court - for example: don't yell "fire" in a crowded theatre) is truly one that we need to be thankful for. The freedom of political speech is one that the Founders took seriously - and we should too.