We Hold These Truths to be Self-Evident... but not Everyone Does 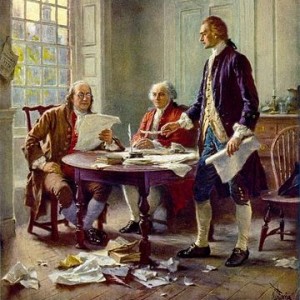 We hold these truths to be self-evident, that all men are created equal, that they are endowed by their Creator with certain unalienable Rights, that among these are Life, Liberty and the pursuit of Happiness.--That to secure these rights, Governments are instituted among Men, deriving their just powers from the consent of the governed, --That whenever any Form of Government becomes destructive of these ends, it is the Right of the People to alter or to abolish it, and to institute new Government, laying its foundation on such principles and organizing its powers in such form, as to them shall seem most likely to effect their Safety and Happiness.

These truths which Americans hold to be "self-evident" and codified in the Declaration of Independence are truly not "self-evident" to much of the world at large.

We just need to take a quick look around -

Of course, we must mention the lack of political speech, basic human rights, the limitations on private practice of religion and the government's role in forced abortions. All of which are at odds with our "self-evident" truths that are G-d given rights.

We can also take a look at the Muslim/Arab world. Slavery still exists there. We assume that it's clear that one person shouldn't own another - but this is another "self-evident" truth that isn't quite that evident to everyone.

The fact that women are created equal to men is also another "self-evident" truth that is unacceptable in the Muslim/Arab world. The right to vote, the ability to even drive a car, the ability to walk in public without a male chaperone, and even the extreme but regular occurrences of honor killings in the Middle East and in western societies such as the United States, Canada and the United Kingdom also point to the lack of basic understanding of "equality", "life" and "liberty".

Some may point to the fact that these high minded truths were not originally adhered to in the United States when this document was written in 1776. That is true. But what it also true is that this document was bringing the novel idea of G-d given rights to the world at a time when they didn't exist. It is a founding document - it is one that all throughout our history people have pointed to in order to show us the way. We are living up to those ideals. Many are not and have no interest in doing so.

There is much to be learned from our founding documents - and much that we take for granted.

Declaration of Independence "Text Study"
Posted by Shira at 9:00 PM

If you find it patriotic and uplifting to hold the Founders as the originators of liberal political theory, then I won't try to stop you. But if you're interested in actual history, you might want to read Hobbes' Leviathan, maybe read some Locke. Then go way, way back and look at the Magna Carta, where limitation of the monarch's power was explicitly spelled out half a millenium before 'the shot heard round the world'. The ideas of liberal governance were well established before the American Revolution, as a philosophical approach.

The American Revolution was not so much the origin of an idea, as an implementation.

And from my point of view, that's much more important. Ideas may at one time have been a 'dime a dozen', but I think you can get a whole pallet of great ideas today for a penny. Now, implementations, those are worth something. A democratic republic, in operation, that's really something.

I see the American Revolution as a climax in a very long war against the old system of feudal vassalage and monarchy, one which started way back in England with the events leading up to Magna Carta and ended with the fall of the Romanovs and the surrender of the Emperor of Japan. Other than a few holdouts in the Middle East, the old system is gone. Please do remember that 'left' and 'right' factions were comrades in this long war, so don't forget what it was about.

That's why I used the word "codified" and I believe I mentioned John Locke in an earlier article. I never said they originated the ideas that they used in the Declaration of Independence, Constitution or other documents - they did use their knowledge of world history, political and social history to "implement", as you say, this government we live under. They were able to articulate clearly what the reasoning was behind the Revolution and later the Constitution.

I am well aware of the history that led up to this point in our history (I did do a masters in Political Science) - but thank you for including it here since I did not.

I would say that there are more holdouts than not - democracy is something that the entire Middle East doesn't understand, or China, or much of Africa, and depending on how things go in Russia - we'll have to see. The Arab Spring looks like it may go the way of one vote, one time - and digress into an Islamic way of life.

What I was saying was that we see all of this as "self-evident" but truly is not to many.