The Godfather is Displeased 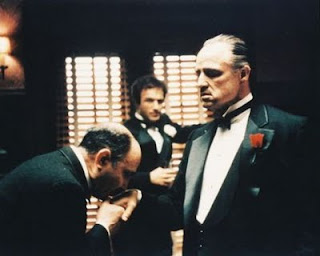 So after bashing Fox News and attempting to sideline their reporting, the Don Obama has moved on to other targets. After reporting lower approval numbers than the Godfather would have liked, the Gallup Poll was attacked by the Don's flunky Gibbs.

I am sure a 6-year-old with a crayon could do something not unlike that.” He continued: “I don’t put a lot of stake in, never have, in the EKG that is the daily Gallup trend. I don’t pay a lot of attention to the meaninglessness of it.

There we have it. Don Obama is displeased with anything that doesn't portray him as the important, world-changing figure he thinks he is and tries to marginalize the research that proves the fact that he's an ordinary Socialist mortal.
Posted by Shira at 12:06 PM

Email ThisBlogThis!Share to TwitterShare to FacebookShare to Pinterest
Labels: the godfather trilogy