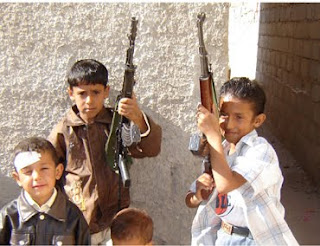 It's wedding season in Yemen and traditionally, that's meant three things: music, dancing and joyously firing an array of pistols, assault rifles, rocket-launchers, anti-aircraft mortars and grenade launchers into the air to celebrate the occasion.

But in the past few years, that last part has been nixed from the program....

For the most part, urban Yemenis are in favor of the disarmament campaign, and are willing to simply adapt their old traditions to a new, gun-less environment. Most urban weddings now feature deafening fireworks displays, which are said to sound remarkably similar to an assault rifle being unloaded into a cement wall. Most urban grooms now pose for pictures with an ornamental assault rifle instead of the real thing. (A least one particularly entrepreneurial vendor in Sanaa has begun renting out bedazzled, gold-inflected AK-47s for just that purpose, Jaleel, the store owner, said.)

"It's a lot better now — it's safer, at least. Before, people would sometimes get hit by bullets accidentally," said Mufudh Said, who sells bouquets of fake flowers for weddings from his small store in Sanaa. "It was terrible."

I came across this article and was glued to the screen. It's funny, sort of. (I'm still chuckling.) Liberals are all freaked out about Americans with semi-autos (which means when you pull the trigger - one - bullet comes out) and revolvers (one bullet at a time) ... Yemenites are only happy when they get to shoot fully automatic rifles, rocket-launchers and grenades. Ha. I wonder if a liberal can excuse the trigger happy Yemenite because it's their tradition.
Posted by Shira at 11:41 AM