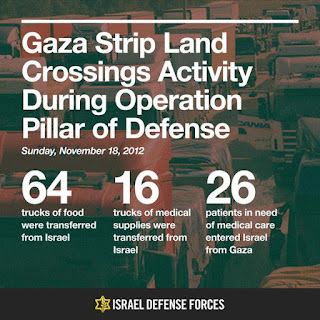 These numbers were posted on Facebook - to remind all of us that the Israeli attacks are only occurring in order to stop the rockets from falling, and are not indiscriminate attacks like those coming from the Gaza Strip. To show everyone that Israelis care about all human beings - even those who prefer to see every Jew dead. And just a reminder to all - Hamas was democratically elected. I have little sympathy for those who voted them in.

I wrote this article back in August 2011. Nothing has changed - I could have written it today.

Feed the Terrorists - They Need Strength to Fire Rockets into Israel


This tweet from the Israel Defense Forces (IDF) Spokesperson caught my eye:

Why? Why is Israel sending tons of "goods" into Gaza?

Rockets are being sent into Israel indiscriminately, over a hundred in the last 3 days - people are being hurt and murdered - and Israel is sending goods into Gaza? It's almost a bad joke.

Does Israel think that sending goods into Gaza is going to make them our friends? We know it isn't going to happen. In fact, a poll of "Palestinians" in the "West Bank" and the Gaza Strip published last month proves the point.

Just 34% said they accepted that concept, while 61% rejected it.

Sixty-six percent said the Palestinians’ real goal should be to start with a two-state solution but then move to it all being one Palestinian state.

Seventy-two percent backed denying the thousands of years of Jewish history in Jerusalem, 62% supported kidnapping IDF soldiers and holding them hostage, and 53% were in favor or teaching songs about hating Jews in Palestinian schools.

So basically, these "people" are all for the kidnapping and murdering of Jews and establishing "Palestine" in all of what is Israel today. Yup, sending tons of goods into Gaza is going to do a lot for this relationship. What a waste.

I just don't get it. This is beyond comprehension. These "Palestinians" are bound and determined to destroy the Jewish People and we're trucking in "goods" as good will gestures. They must be laughing at us. How stupid are the Jews?

Come September when these wonderful, "peaceful" and tolerant people come to the United Nations to ask for a state - I'm sure they'll remember the good ole' days when the Jews were trucking in "goods" to help them out... even while they were sending rockets raining down on Ashkelon and Be'er Sheva. I'm sure that they really care.

It's amazing that some still assume that the "Palestinians" in the "West Bank" are somehow different than the ones in Gaza. Again, remember that this poll includes both groups... and again, remember that Fatah in the West Bank and Hamas in Gaza are already in unity talks - which means that the United Nations will be thrilled to announce new terrorist states in the West Bank and in Gaza as well. Another bad joke.

Since the "Palestinians" have decided to forgo all negotiations and treaties signed with Israel - Israel should say that all is null and void. It's time to annex Judea/Samaria (aka the West Bank) and end the Arab occupation of Jewish land. We have a 3000 year history the Arabs do not respect or recognize. If those Arabs living in Judea/Samaria cannot handle living in a Jewish State - they are welcome to leave. No one is stopping them.