A Moment of Silence for Jews? You Must be Joking 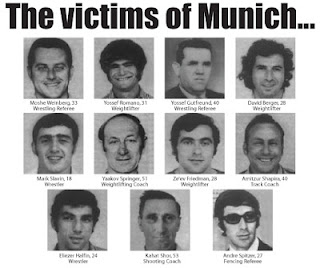 Two widows of the murdered athletes have requested from the Olympic committee for a moment of silence during the Olympic opening ceremonies Friday night.  Their request for a public moment has been rejected.

In contrast to the Munich massacre being broadcast around the world, this week the Olympic committee held a small, private ceremony to remember the Israeli athletes. I assume not to offend anyone, especially not the Muslims that have come to the Olympics to be part of a peaceful, worldwide celebration of mutual respect and competition. And certainly not to offend the "Palestinian" delegation, whose murderous president has yet to be brought to brought to justice.


Sports are a bridge for love, communication and the spreading of peace between nations and should not be used for divisiveness and the spread of racism.

Why should we be surprised by the "Palestinian" or Olympic reaction to the request for a moment of silence? The "Palestinians" continue to advocate violence against Jews, naming roads and parks after so-called martyrs. President/murderer Mahmoud Abbas denies the Holocaust and the Jewish history in the Land of Israel.

While we know the "Palestinians" are calling for the murder of Jews, we always seem to hold out hope for the international community for some reason. We hope that the Olympic Games and the high standards of 'brotherhood and community' ring true. But why do we bother? The "Palestinians" were first allowed to compete in the Olympics in 1996, only 24 years after the massacre. Jewish blood is cheap. Why not let them compete alongside the same people that were murdered? Sure, why not.