Who Cares about the Murder of Jewish Children? 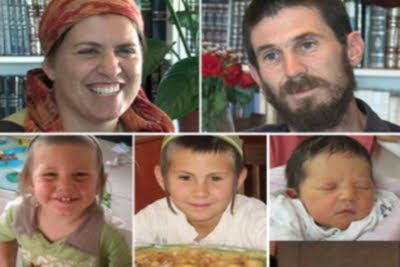 On the anniversary of the Fogel family's massacre, I am reposting an important article. Please take the time to read it. Also please take a moment to support One Family Fund, an organization solely focused on helping Israeli terror victims - they need all of us behind them.

The silence of the West

One year ago the Fogels were slaughtered in Itamar: Father, mother and three children butchered during a night of horror. That night, a 12-year-old Israeli girl was out with friends until midnight, close to her village, where 100 families live. She arrived home. Nobody answered. She went inside with a neighbor and she saw her mother, father, three siblings (aged 11, three and three-months-old) with their throats cut.

Yet a year after the event, those who profess to deplore violence on both sides of the Israel-Palestinian equation have been completely silent on the Itamar massacre. No words of condemnation about the killing of innocents were heard from human rights groups and NGOs.

In Itamar, the daily diet of settler demonization had its intended effect. Killing a "demon" or the children of “monsters” or “devils” is not like taking the life of a fellow human being. Judea and Samaria’s citizens have indeed been called “leeches”, “snakes” and “parasites.”

In the midst of the second Intifada, when his own students were being butchered on buses and restaurants, Hebrew University Professor Ze’ev Sternhell declared that “the Palestinians would be wise to concentrate their struggle against the settlements.” Like Itamar. In 2001, after Arabs sadistically bashed the skulls of two “settler kids” in Tekoa, Israeli psychiatrist Ruchama Marton declared that “the settlers raise little monsters.” Moshe Zimmerman of Hebrew University said he regards settlers as Hitlerjugend.

Itamar also meant that no rational argument can be used against an ideology maniacally dedicated to Jewish destruction. The dark and glittering eyes of Itamar’s terrorists are telling of their desire to make the Mediterranean red with Jewish blood. It is no wonder then that during a recent program aired on Palestinian television, the aunt of one of the Fogel killers referred to him as a “hero” and “legend.”

The aunt went on to read a poem she had written in the murderers’ honor, while Hakim Awad’s mother sent her regards to her son and proudly boasted that he was the perpetrator of the Itamar massacre. In this context one should keep in mind that the Palestinian Authority's Television is also funded by the European Union, which often displays its blue flag during the broadcasts.

Yet there is something even more horrible than Awad’s sadistic hatred: Western’s complacency. In recent years we have seen plenty of saccharine movies about Jewish children killed in the death camps in their pajamas, but the same public opinion reacted with indifference to the images of the Fogel babies dismembered by terrorists.

Jew-hate socially acceptable
The Fogels, right down to the decapitated baby, were less human than the Arab victims and therefore less deserving of Western outrage on their behalf. The “settler kids” are invisible, as the northern Israel towns were during the 1970s, when Yasser Arafat’s terrorists murdered Israeli babies in Ma’alot, Kiryat Shmona, Misgav Am and Avivim.

Who knows the name of Shalhevet Pass, the Hatuels and the Shabos? Or Danielle Shefi from Adora, who was shot by terrorists while she was playing in her parents’ bedroom? Who remembers the name Shaked Avraham, a seven-month-old girl from Negohot, who was killed by a terrorist who infiltrated the community while residents were celebrating Rosh Hashana, the Jewish New Year? Shaked had just started walking at the time of her murder.

Itamar’s massacre has been excused, as the “anger” of the perpetrators is fully justified in international eyes. PA President Mahmoud Abbas said many times that “I will never allow a single Israeli to live among us on Palestinian land.” Such state would be the first to officially prohibit Jews or any other faith since Nazi Germany, which sought a Jew-free country.

That an Arab movement should call the presence of Jews an obstacle to peace is one thing. It is quite another for an enlightened and so-called liberal world to do so. But this is the precise reason why Itamar didn’t cause any global scandal. Because in a world less surreal than the one we live in, the act of bursting into a Jewish home and slitting the throats of babies would be the cause of moral and religious outrage.

Multiply this act by thousands and one might think it would prompt an international uproar. Yet in the world we live in, Itamar was just a footnote. The Vatican made no reference to the Itamar massacre; nor did UNICEF raise its voice against the slaughter of innocent Jewish children.

The media then fabricated the justification: Because Itamar’s babies were “settlers,” they brought the crime upon themselves. Indeed, after any killing spree of “settlers,” we all read the same comment in the mainstream media: If the Jews hadn’t been there, they wouldn’t have been killed. If Israel took this approach seriously, it would dismantle the entire Israeli state.

It is hard to escape the feeling that had similar attacks occurred in, say, London or Paris, rather than in a religious settlement in Samaria, the reaction would have been totally different.

Dutch writer Leon de Winter said it well: “Anti-Semitism Is Salonfähig Again,” using the German word meaning socially acceptable. Today, no other conclusion can be drawn. When the deaths of Jewish innocents go so unacknowledged, it is because Jewish lives do not count. This is the most important lesson of Itamar: the “civilized world” is already reconciling itself to the prospect of a new Shoah.

Giulio Meotti, a journalist with Il Foglio, is the author of the book A New Shoah: The Untold Story of Israel's Victims of Terrorism
Posted by Shira at 11:52 PM

Shira - this is Morris Slutsky. Write me back at my gmail if you want, that's my first name, a period, my surname, at gmail dot com.

Basically your goddamned conservative facebook pals on the group 'I am a Jew and will not be voting for Obama in 2012' made a false accusation - that I was using a 'fake name' - and got my Facebook account disabled. FB does not offer any support other than an automated system here, there's no way to get it fixed other than to send them a photo of my ID - and wait. I hear it can take months.

I'm really furious at the loss of my account, which I used for business & job searching as well as personal chat, and I think you need to be aware of the risks of political discussion on Facebook.

I'm about 100% sure that this was done by people in your wonderful discussion group 'I am a Jew and will not be voting for Obama in 2012'.

It could happen to you and probably will.

I ask you to publically take a stand against this vicious behavior on my behalf. Will you do it? Please email me and tell me yes or no.