Could Thomas Friedman be Right? 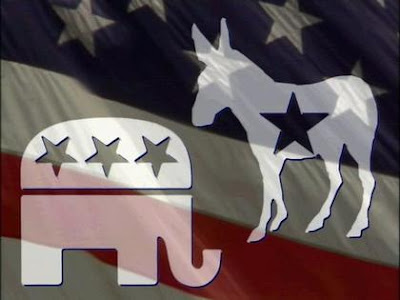 It's really amazing that Thomas Friedman gets paid to write. Really. How come I can't find someone to pay me for ridiculous opinions?

His article, "We Need a Second Party", laments that the Republican Party has become radicalized and is no longer in touch with it's "conservative" base - creating an inability to settle on a candidate and therefore, the Republicans should consider sitting out the 2012 election. Seriously?

How convenient that Mr. Friedman forgets that the Democratic primary of 2008 stretched into early June with candidates Hillary Clinton and Barack Obama happily bashing each other month after month. That was fun to watch.

The reason why Mr. Friedman believes that the Republican Party is no longer relevant, is because it has devolved into "conflicting ideological bases". Really? I'm quite sure what the party stands for - a smaller, limited, Constitutionally based government, lower taxes, fewer regulations destroying business, pro-gun (aka self-defense), pro-life, and marriage = one man & one woman. I'm not sure what's unclear about this, or how these ideas are "conflicting" or "radical" as he likes to say.

Considering the fractured nature of the Democratic Party, his thesis is in serious need of revision since the Democratic Party is mostly focused on identity politics - everyone needing for their hyphenated group to be heard over the cacophony of competing interests.

Two competing groups within the Democratic Party that made the news lately were the environmentalists and big labor. Remember the Keystone XL Pipeline from Canada? That pesky project that would have created (not saved) thousands of jobs - yeah, that one. Labor wanted that project, the environmentalists did not... ergo, no pipeline, no jobs, no energy independence. Talk about conflicting ideas. I'm so glad the President has his priorities straight.

Friedman seems to be desperate to have a reformed Republican Party - someone the Democrats can work with.


What we definitely and urgently need is a second party — a coherent Republican opposition that is offering constructive conservative proposals on the key issues and is ready for strategic compromises to advance its interests and those of the country.

Without that, the best of the Democrats — who have been willing to compromise — have no partners and the worst have a free pass for their own magical thinking.

It seems that Friedman has some magical thinking happening in his own mind. He believes that the Democrats "have been willing to compromise". News to me. ObamaCare ring a bell for anyone? The monstrosity that is already trampling on religious freedoms in the name of the public "good". I vaguely remember that being jammed through Congress without the support of one Republican. Pass it so we can find out what's in it - to paraphrase Nancy Pelosi. Gosh, I have a master's degree in political science, but I don't remember learning that we read bills only after they've become law.

It seems that whenever Republicans have ideas - conservative ideas - the Democrats don't like them. Among these ideas is how to deal with that annoying 16 trillion dollar deficit. Republicans came up with the Ryan Plan - a conservative plan created to save our security net for those who need it and reduce the deficit so we don't end up like Greece and the rest of Europe heading down the financial toilet. Surprisingly enough, the Democrats didn't like it. Did they put forward a plan of their own? Of course not.

Let's take the payroll tax cut that was being debated until this morning. Both the Democrats and Republicans wanted to extend it - however, the money collected from that tax goes to the Social Security fund (already in trouble). The Republicans originally wanted like to know how the shortfall was going to be paid for. Seems like a reasonable question. But it seems that instead of standing on the "conservative" ideals that the party is supposed to stand for, and Mr. Friedman is so concerned about, the Republicans decided to "compromise" with the Democrats and add a chunk more money to the Federal deficit. I don't hear the Democrats complaining that the Republicans aren't being conservative enough.

But, you know, the more I think about Thomas Friedman's article calling for a second party, the more I think he may have a point. Perhaps it is time to call for a second party, a reasonable party that realizes the financial straights we find ourselves in. Perhaps it is time to find a party to discuss big ideas with. Perhaps the Democrats would like to step up and volunteer to be that 2nd party?
Posted by Shira at 2:34 PM