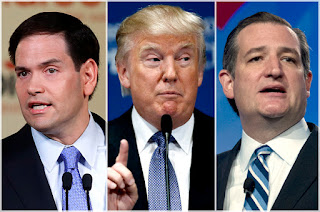 I am clearly not a Donald Trump fan, nor will I pretend to be.

There is a lot of talk revolving around what will happen if Donald Trump is able to collect enough delegates to win the Republican nomination for President. Some are suggesting that the "establishment" do something and somehow make it impossible for Trump to gain the nomination. I think this would be a terrible mistake.

Just because the Democratic party's nomination is rigged, doesn't mean that the Republicans should follow suit. Trump's rise is due to the Republican "establishment" ignoring the will of the people who put them in office. We gave them both the Senate and House of Representatives believing that they would stop the Obama Administration, and they didn't. Just a couple months ago the Republicans passed a budget that would add another trillion dollars to the deficit. A trillion more here and a trillion more there, maybe we'll be talking about real money. It's almost laughable.

If the establishment does anything to stop Trump, outside of Marco Rubio or Ted Cruz getting enough delegates - Trump can rightly say that the nomination was stolen from him. He can point at the establishment's interference... the same establishment that created him as the leading candidate. His supporters will not support the establishment nominee (and those who may not have supported him originally), the Democrats will win, and the Republican party will fracture. To even consider intentionally handing the election to the Democrats, is beyond my comprehension.

The party must let this nomination process take its course. Elections are about choices. The establishment blew their chance to lead. I do not support Trump, but I do support democracy in action. If he ends up being the Republican nominee, the party must work with him and put the country back on track. For the establishment to expect our support after derailing Trump (if it comes to that), they would be delusional.