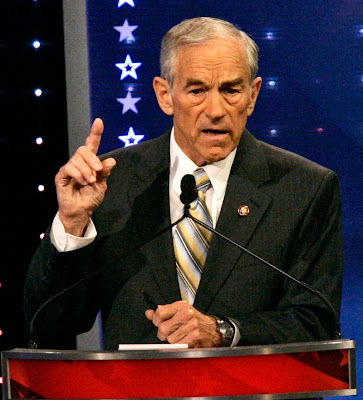 Happy Chanukah!
Merry belated Christmas!
(and no, they are not related holidays)

Only a few more days until the Iowa caucuses when the real fun begins.

Just a quick note on the race -

The Ron Paul newsletters should be getting much more attention than they are getting right now. I think we can safely say that Paul is a racist and an anti-Semite.

Many would say these newsletters don't matter since Paul isn't representative of the Republican party or of mainstream Americans as a whole. I disagree. He needs to be drummed out of the party on principle. We cannot have bigots on the national stage attempting to become the Republican nominee for president. Let me be clear - I am not condemning him for his libertarian and isolationist views - I am condemning him for being a racist and an anti-Semite.

Ron Paul has a right to hold any ideas he chooses. It's a free country. However, at the same time, he does not have to be a part of the Republican Party. He's not good for the party, and he's not good for America and what we stand for as a people.

The Real Ron Paul
Posted by Shira at 1:25 AM

Paul's the only one I know of that believes that Mossad committed 9/11. I don't know of anyone else running that can be accused of racism that is running for President in the Republican party. Spit it out if you really believe that. And, by the way, being against Obama doesn't make you a racist. I can't stand his policies and wouldn't vote for him if he were all white.