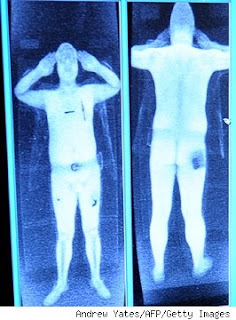 Nobody can say that Muslim terrorists aren't creative. They certainly are. Whether they are busy strapping bombs to children, to animals, hiding them in ambulances or in their underwear -- we must at least acknowledge a high level of creativity.

It is truly amazing. These people are so dedicated to murder, they will find many different paths to their objective.

While our airport screeners are busy pulling old women and those with young children out of line - there are those finding ways to hide their dangerous packages -- in places where screeners are unlikely to look. Example: The Briefs Bomber.

Now we are facing a new type of bomber, the Breast Bomber. Yes, it's true.

Agents for Britain's MI5 intelligence service have discovered that Muslim doctors trained at some of Britain's leading teaching hospitals have returned to their own countries to fit surgical implants filled with explosives...

Women suicide bombers recruited by al-Qaida are known to have had the explosives inserted in their breasts under techniques similar to breast enhancing surgery. The lethal explosives – usually PETN (pentaerythritol Tetrabitrate) – are inserted during the operation inside the plastic shapes. The breast is then sewn up.

Give the terrorists extra credit for their efforts.

Thankfully we have a new screening machine and it seems to be able to detect this type of situation. A woman writing about her experience explained that she was pulled over because of reconstructive breast surgery due to a mastectomy - which included a sac of silicone. It's a good thing she has a good sense of humor -- but at the same time hits the nail on the head.

Frankly, I think it's a good thing that they're being careful about my left breast. It's probably only a matter of time until someone tries to be the first "boobie bomber." Because, really, shoes and underpants are so passe in the terror world these days.

Shockingly enough Muslims are not okay with this new type of screening.

The Fiqh Council of North America – a body of Islamic scholars that includes some from Michigan – issued a fatwa this week that says going through the airport scanners would violate Islamic rules on modesty.

This ruling against the scanners is being supported by CAIR and the Islamic Society of North America.

According to terrorism expert Steven Emerson, ISNA "is a radical group hiding under a false veneer of moderation"; "convenes annual conferences where Islamist militants have been given a platform to incite violence and promote hatred" (for instance, al Qaeda supporter and PLO official Yusuf Al-Qaradhawi was invited to speak at an ISNA conference); has held fundraisers for terrorists (after Hamas leader Mousa Marzook was arrested and eventually deported in 1997, ISNA raised money for his defense); has condemned the U.S. government's post-9/11 seizure of Hamas' and Palestinian Islamic Jihad's financial assets; and publishes a bi-monthly magazine, Islamic Horizons, that "often champions militant Islamist doctrine."

If we know that terrorists are exploring breast implant bombs...
And we know that most (if not all) terrorists today are Muslim...
And we also know that Muslims are not okay with profiling or with enhanced screening...
What does this leave us thinking about Muslims and our security?
Posted by Shira at 12:51 PM

Here's another thought -- just because they detect breast implants doesn't mean that they know what's in the implant (ie explosives)... right?

Mark Steyn predicted months ago on National Review that Muslims would use the immodesty complaint to stop the body scanners.

If all airports get these body scanners and muslims wont go through them, they will work better than expected. Since all or most terrorists are muslim, if the machine keeps muslims off planes there will be no terrorism.

If it gets to the point where all Muslim women (in garb) are excluded from security, I will encourage ALL AMERICAN WOMEN to travel in the burqa as well.