Memo: Dissent is no Longer Patriotic 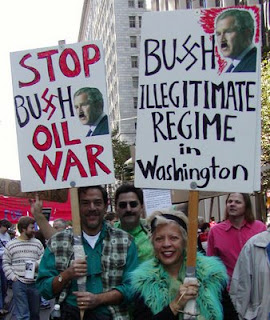 Did everyone get that memo last week? It's official. Dissent is no longer your patriotic duty as an American. Yes, it's true.

For eight years it was a liberal's official patriotic duty to dissent... dissent which included a full length movie about the murder of President George W. Bush, of posters equating Bush with Hitler and the Nazis, of calling our soldiers' actions in Gitmo comparable to what could "have been done by Nazis, Soviets in their gulags or some mad regime — Pol Pot or others..." And here we are now, in 2009, it is no longer patriotic to criticize the president or his policies.

It's no longer patriotic to concern ourselves with policies that are inherently destructive to the American way of life. While it seems that dissent and discontent are good for the goose, it is not good for the gander. In fact, if one disagrees with the current President and his Democrats... you will be de-legitimized and possibly sent to the hospital.

After years of calling conservatives Nazis, it seems that the Democrats have accustomed themselves to using this type of language. Speaker of the House Nancy Pelosi accused those who oppose the House health care bill of "carrying swastikas and symbols like that" to town hall meetings... in effect calling those protestors Nazis. She and Steny Hoyer (D-MD) went on to call their criticisms "un-American". John Dingell (D-MI) has picked up the ball and said that the protestors remind him of the Ku Klux Klan... so in other words... protestors are racists.

Anyone who disagrees with the Obama healthcare plan is now a racist or a Nazi. Democratic officials determined to have "talks" with their constituents (many who are Democrats themselves) are bringing with them muscle to make sure their message is heard. SEIU (Service Employees International Union) is being used as the muscle. We see the results. Kenneth Gladney's attorney writes a letter describing the treatment that Mr. Gladney received at a St. Louis town hall meeting as a black conservative.

I am Kenneth Gladney’s attorney. Kenneth was attacked on the evening of August 6, 2009 at Rep. Russ Carnahan’s town hall meeting in South St. Louis County. I was at the town hall meeting as well and witnessed the events leading up to the attack of Kenneth. Kenneth was approached by an SEIU representative as Kenneth was handing out “Don’t Tread on Me” flags to other conservatives. The SEIU representative demanded to know why a black man was handing out these flags. The SEIU member used a racial slur against Kenneth, then punched him in the face. Kenneth fell to the ground. Another SEIU member yelled racial epithets at Kenneth as he kicked him in the head and back. Kenneth was also brutally attacked by one other male SEIU member and an unidentified woman. The three men were clearly SEIU members, as they were wearing T-shirts with the SEIU logo.

Kenneth was beaten badly. One assailant fled on foot; three others were arrested. Kenneth was admitted to St. John’s Mercy Medical Center emergency room, where he was treated for his numerous injuries. Kenneth was merely expressing his freedom of speech by handing out the flags. In fact, he merely asked people as they exited the town hall meeting whether they would like a flag. He in no way provoked any argument or altercation, as evidenced by the fact that three assailants were arrested.

[Here is the video of this attack.]

Is this what we can expect? Violence, threats and de-legitimization of our concerns? Time to re-write that First Amendment protecting our right to free speech and assembly. Keep checking your in-box for that memo.

More about this by Dennis Prager.
Posted by Shira at 11:37 AM